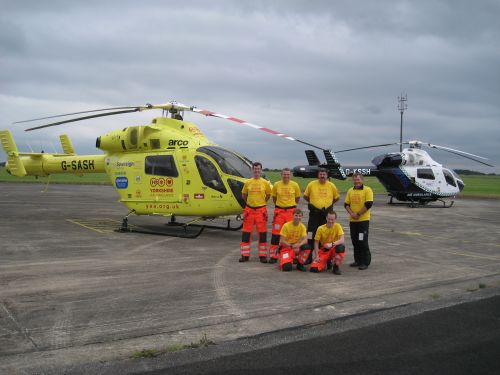 The Yorkshire Air Ambulance (YAA) has seen its busiest weekend in their fourteen year history as the Tour de France passed through Yorkshire.

On the Saturday and Sunday alone, the Charity attended twenty-one incidents across the region, excluding a further ten jobs on the Friday (4th). On a normal weekend, the YAA may attend around three to four incidents.

However the YAA were well prepared for the expected increase in operational activity and had drafted in the use of a third helicopter to help provide extra coverage over the weekend.

Speaking about their busy weekend, the Charity’s Marketing and Communications Manager Abby McClymont commented: “We knew that we were in for a busy few days with the excitement of the Tour de France coming to the region, however this past weekend has been one of the busiest for the Yorkshire Air Ambulance. Our two helicopters, along with the third extra helicopter and their crews have attended twenty-one incidents on Saturday and Sunday alone – on Saturday we attended nine incidents and Sunday, twelve incidents.

We also experienced an extremely busy day on Friday too, being called out to ten incidents. We have had many busy weekends in the past, but nothing as busy as this last one has been.

We were pleased to be able to work alongside the other emergency services and help out where required.”

Although a lot of the incidents were not related to the Tour de France activities, the majority attended over the weekend were linked to the event in some way.

Abby continued “We have been called to a few members of the public who have been out cycling on the route, or en route to watch the race over the weekend and have unfortunately found themselves in need of air ambulance assistance.

Other incidents have also included spectators who have developed health problems whilst waiting for the race to go past.

However generally we have attended the same kinds of jobs we would usually be alerted to, but just in a greater volume due to the vastly increased number of people in the region over the weekend.”

Between the three Yorkshire helicopters operational at the weekend, one each were based from their current airbases on the Nostell Estate near Wakefield and at RAF Topcliffe near Thirsk, whilst the third helicopter was operational from stand-by points at pre-identified and surveyed locations close-by to the route – these were at Wathgill Camp near Richmond and at Beeston Hall Farm, just near Ripponden.

Abby concluded “As well as being busy operationally, we were also busy with lots of Tour de France related fundraising events being held in aid of us. The atmosphere along the route was fantastic and Yorkshire has a lot to be proud of. We would like to sincerely thank everyone who has supported us, especially over this weekend.”

The Yorkshire Air Ambulance is an independent Charity providing a rapid response emergency service to the people of Yorkshire. Their two yellow helicopters provide air ambulance cover 7 days per week, 365 days per year.

It costs £9990 each day to keep the Charity running, and with no direct government funding, relies on individuals, groups and organisations to help raise the vital funds required. The only help they receive is through the secondment of their paramedics from Yorkshire Ambulance Service NHS Trust.