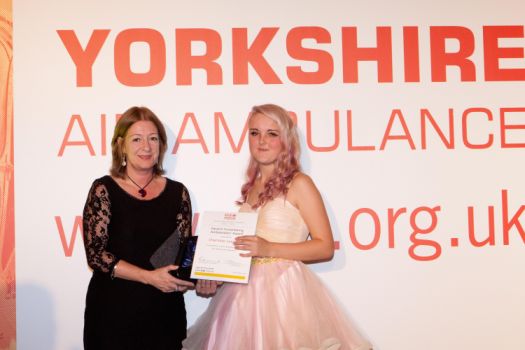 A courageous York teenager, whose life was saved by Yorkshire Air Ambulance, has received a special award from her helicopter heroes.

Charlotte Leighton, 18, was honoured at a Recognition Awards evening held by the independent charity to mark the amazing achievements, commitment and courage of volunteers, official fundraisers and corporate supporters.

Charlotte of Tollerton, near York, almost died seven years ago after suffering severe facial injuries in a road accident outside her home.

The badly injured girl was airlifted to Leeds General Infirmary by Yorkshire Air Ambulance where surgeons re-built her shattered face using pioneering facial reconstruction surgery. Since then Charlotte and her family have raised well over £50,000 for the rapid response charity.

A wide range of organisations and companies were also recognised for their support at the special dinner at RAF Linton-on-Ouse hosted by YAA patron and ITV Calendar presenter Gaynor Barnes.

They included Yorkshire free range egg company James Potter, which displays the YAA logo on all its packaging and is donating 1p from every pack of 12 eggs sold to the rapid response charity which should create an annual income stream of £20,000 a year for the air ambulance charity.

The family-run farm is just a few fields away from YAA’s northern base at RAF Topcliffe, near Thirsk, and supplies eggs to all the major supermarkets across Yorkshire.

RAF Linton on Ouse and the 4th Regiment Royal Artillery, Alanbrooke Barracks, were joint winners of this year’s Chairman’s Award to recognise their efforts in helping the YAA successfully relocate to RAF Topcliffe.

The YAA is an independent rapid response emergency service serving 5 million people across Yorkshire. Without any direct government funding, the only help the charity receives is through the secondment of their paramedics from the Yorkshire Ambulance Service NHS Trust.

In its 13-year history the charity has carried more than 5,200 people but needs to raise £9,900 each day to keep its two helicopters in the air and maintained – equivalent to £3.6 million a year.