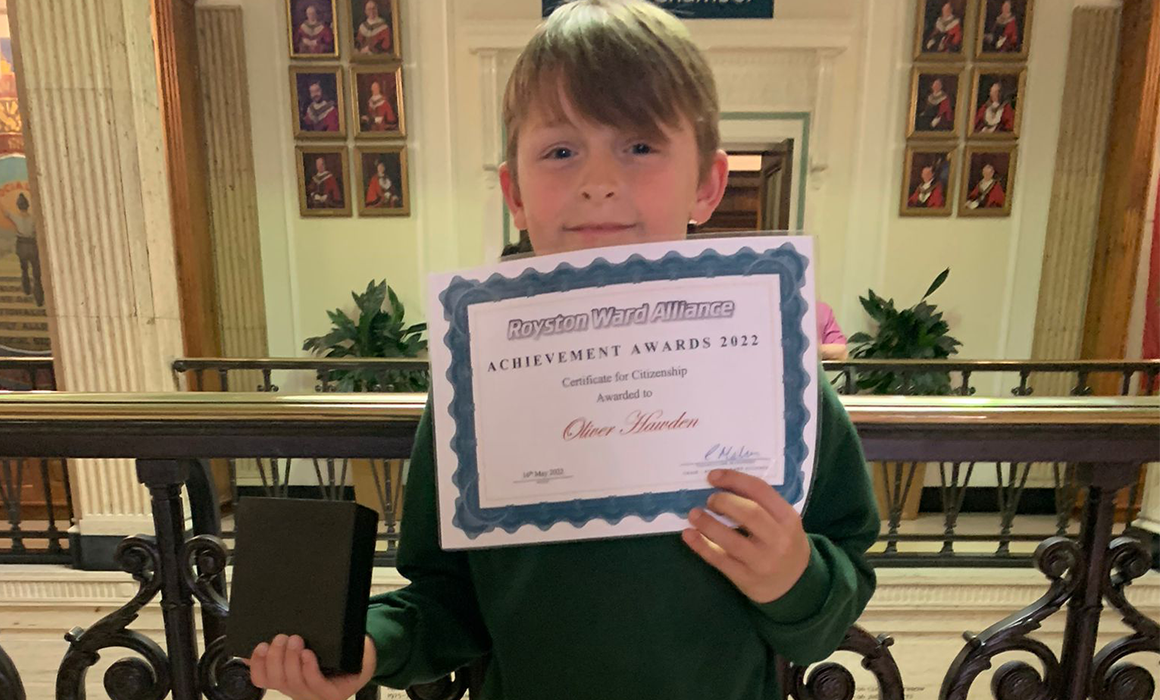 In the last year (2021) Yorkshire Air Ambulance has responded to 223 incidents across South Yorkshire, 38 of which were in Barnsley. As an independent charity requiring £12,000 a day to keep both of their air ambulances in the skies and saving lives across the region, the support they receive from local communities is the life-blood of the service.

Oliver’s grandad, Stephen Croft, was airlifted by Yorkshire Air Ambulance after suffering a cardiac arrest pitchside at the Barnsley vs Burton Albion game on 22nd September 2018.  He collapsed in front of a crowd of 11,000 people at the Club’s Oakwell Stadium ground before the YAA landed and took him to Sheffield’s Northern General Hospital for treatment. The incident was very widely publicised at the time due to Stephen’s collapse happening just prior to kick off, in front of a packed crowd at Oakwell.

His school, Royston St John Baptist CE Primary School, nominated Oliver for the Royston Alliance award, which champions young people who have put themselves forward to help improve the communities they live in, and he was presented with his award by Councillor Caroline Makinson on 16th May 2022

Rachel Steele, Deputy Headteacher at Royston St John Baptist CE Primary School said: “We always celebrate our pupils’ achievements in and out of school and Oliver’s charity work for the Yorkshire Air Ambulance is an achievement to be proud of.  Oliver and his family have helped to raise the profile of the organisation within the school through fundraising opportunities and by promoting the work of the air ambulance with information sessions for pupils. Oliver is proud of his links and speaks about his involvement with teachers and his fellow peers. Oliver’s Achievement Award is a way to celebrate his dedication and passion of such a worthy cause.”

Vickie Bowden, Yorkshire Air Ambulance Regional Fundraising Manager (South & West), said: “It’s great to see people getting involved with fundraising at a young age and Oliver should be proud of his achievements. We cannot thank him enough for his support. Well done on your award, Oliver. ”