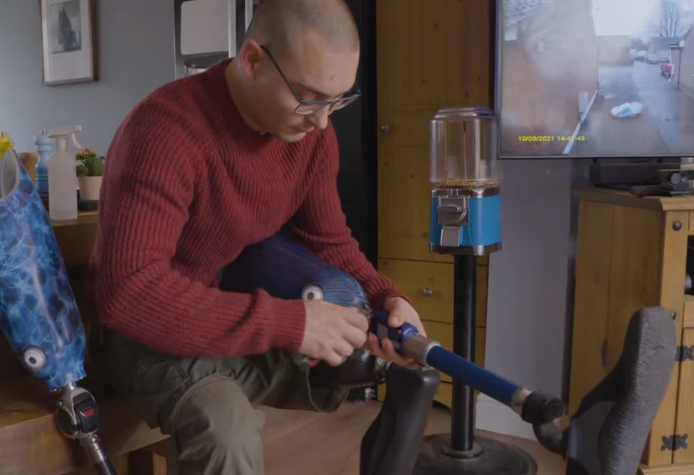 An Army veteran whose prosthetic leg literally saved his life after a road traffic accident is set to appear on the TV series Helicopter ER.

Scott McNiece, from Leeming Bar, North Yorkshire was driving on the A1M on his way to pick up his daughter from school. The weather was treacherous and as Scott moved from the outer to the middle lane for better visibility, he collided with a broken low loader van that was stationery without its hazard lights on.

Speaking of his incident, Scott said: “I was travelling down to Rutland to pick up my daughter and I was in the slow lane behind a truck that was spraying me with rainwater. I couldn’t see what was ahead, so I pulled into the middle lane for better visibility, but unfortunately, there was a broken-down truck with no hazard lights and I didn’t have time to brake.”

A motorist who witnessed the incident stopped to call emergency services and to check on Scott, whose car ended up on its side in the layby.

Scott was trapped in his vehicle by a prosthetic leg he had fitted following an incident whilst serving in Afghanistan in 2018, but miraculously had no other visible injuries at the time. His service dog Ruby, who was travelling him that day, also escaped the incident relatively unscathed as she landed in the footwell upon impact.

Yorkshire Air Ambulance dispatched their Topcliffe aircraft and after an assessment from their Paramedics, Scott was deemed stable enough to travel by road to Leeds General Infirmary. His dog Ruby was taken to the vet for a checkup by the police.

Tests at the hospital revealed that Scott had fractured several ribs and broke his foot. Had Scott’s other leg not been the prosthetic, it would have been devastated by the collision and could have led to life-threatening injuries.

Scott said: “All the components of my prosthetic leg are made from titanium.  When the bonnet of the van crushed forward, the position of my leg stopped the impact. I was really lucky”

Speaking of his service dog Ruby, he continued: “I was worried about Roo. She had a cut on her nose after the incident and she was a little bit tentative when we first took her out in the car again, but she settled down eventually. After a week or two, she was back to her normal self.”

The episode, which airs on Channel Really on 7th September 2021, also features a boy knocked down by a car in North Yorkshire and a patient who fell from a horse in Keighley.