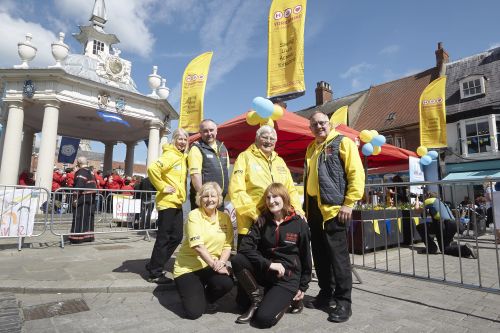 Hull based safety company, Arco, joined forces with the Yorkshire Air Ambulance (YAA) to supply its volunteers with distinctive and practical uniforms during last week’s Tour de Yorkshire. Having been inspired by the uniforms Arco designed for Hull City of Culture last year, YAA decided it was time to refresh its own volunteer uniforms, with branded, distinctive and functional outfits.

As the official charity partner of this year’s Tour de Yorkshire,  Air Ambulance wanted to ensure its 100 volunteer fundraisers were easily identifiable throughout the event in order for the independent charity to use the opportunity to raise awareness and collect donations to support its work.  Providing life-saving rapid response emergency service to 5 million people across Yorkshire, YAA relies solely on donations in order to keep its two helicopters in the air.

Abby Barmby of Yorkshire Air Ambulance said: “As this year’s official charity of the Tour de Yorkshire, we really felt it was time to rejuvenate the uniforms supplied to our fantastic volunteers and, having worked with the Arco team previously, we knew they were the right people for the job. We’ve had some fantastic feedback from our volunteers including how comfortable they are to wear, which is great to hear. I would like to thank Arco for its hard work as well as all the local support and donations we receive, the generosity from residents really is the life blood of the charity.”

Following the positive feedback and success of the uniforms at the Tour de Yorkshire, YAA is now planning to kit out a further 50 volunteers and the pilot and paramedic crew.