Air Ambulance flying high thanks to the Tour de Tickhill 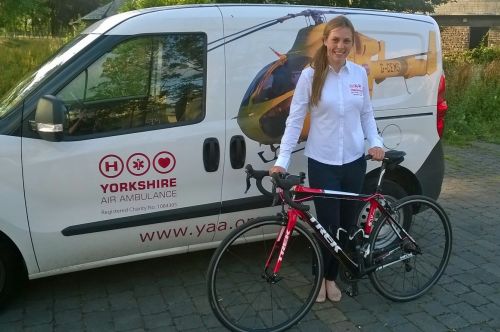 Mourning the departure of the Grand Depart? Well, the super summer of cycling in Yorkshire continues with the YESSS Tickhill Grand Prix.

The closed road cycle race is only its second year, but has attracted professional riders and teams from all over the country.

Boasting eight races through the historic streets of Tickhill, near Doncaster, free admission, close to the action spectating, big screens, stalls and lots more it promises to be great day for all the family.

And supporting the event, on August 24, will also boost the funds of the Yorkshire Air Ambulance (YAA), Tickhill Grand Prix’s official charity partner for the next three years.

Mark Perry, Yorkshire Air Ambulance South Yorkshire Regional Fundraiser, said: “We were delighted when the Tickhill Grand Prix approached us to become a partner. Cycling is a huge, fast growing sport and with the fantastic success of the Tour de France in Yorkshire, I’m sure this will be a hugely popular event.”

Alongside a profit sharing agreement, the Grand Prix will be raising money for the YAA on the day. It is hoped the air ambulance will be there, and visitors can also actively support the rapid response charity by taking part in a special Rollapaluza 500m static bike challenge.

The Grand Prix will host eight races from 1pm till 7.45pm including Professional Elite – both Men and Women – Penny Farthing, amateur and youth races.

And one of those riders on the start line at Tickhill will be newly appointed YAA events and volunteer coordinator Jenny Eastham from Menston, Leeds.

“I didn’t know I would be working for the Air Ambulance when I entered the race,” said Jenny, who was previously a resort manager in Meribel, France, for a tour company.

“I got into cycling when I was working in France, but this will be only my third race, so it’s a bit daunting. But it will be just great to take part, especially as the organisers are supporting us so generously.

“I’m sure with the amazing success of the Grand Depart and the Tour de France in Yorkshire, lots of people will want to come to such a beautiful, historic village and support the Grand Prix.”

Yorkshire Air Ambulance (YAA) has carried more than 5,600 people in its 13-year history. It needs to raise £9,990 each day to keep its two helicopters in the air and maintained – equivalent to £3.6 million each year.