A tribute to amazing Maisie 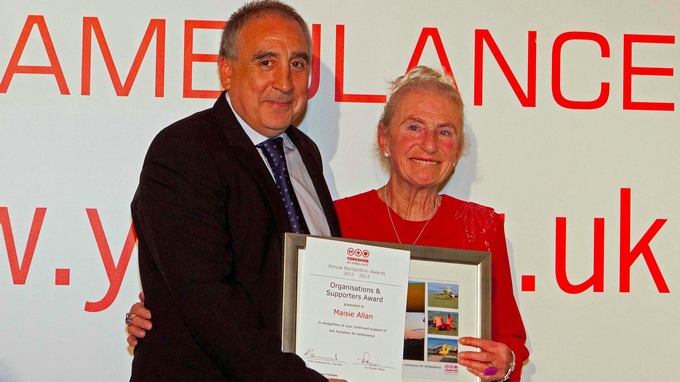 The Yorkshire Air Ambulance has paid tribute to remarkable fundraising pensioner Maisie Allan who has sadly lost her long battle against cancer.

Despite being diagnosed with terminal cancer in 2013, the courageous 85 year-old from Rothwell, Leeds, completed a 900-mile static bike challenge raising over £3,600 for the charity she loves.

And last year Maisie started her biggest fund-raising challenge yet – defying doctors in a brave bid to walk the world for the YAA.

With a pedometer attached to count every step she took each day, Maisie had planned to walk the equivalent of a round the world hike – that’s around 65 million steps!.

She managed to raise more than £1,700 before she became too weak to walk. Maisie, who called her tumour ‘Tommy’, died last week at St Gemma’s Hospice, Leeds.

Kerry Garner, Regional Fundraising Manager for the YAA, said: “Maisie was a wonderful lady and it was a real privilege to get to know her during her time fundraising for the Yorkshire Air Ambulance.

“She was such a character and really was an inspiration to so many, showing us all that no matter what your situation, anything is possible.

“We are also glad that we were able to recognise Maisie’s fundraising efforts before she got too ill, and we’ll always remember the smile on her face when she was presented with her award.  Our deepest sympathies go to Maisie’s devoted husband Peter who was her rock.  She will be very sadly missed by all at the Yorkshire Air Ambulance.”

Former nurse Maisie and Peter – “my rock” – were also taken on a VIP tour of the service’s new air base at the Nostell, near Wakefield, when she said:  “I’m just an ordinary Yorkshire lass wanting to do good for these amazing people.”

Yorkshire Air Ambulance (YAA) is an independent rapid response charity, which has carried more than 5,900 people in its 14-year history. It needs to raise £9,990 each day to keep its two helicopters in the air and maintained –  equivalent to £3.6 million each year.