£50,000 fundraising milestone reached for YAA in memory of Mick Cottam 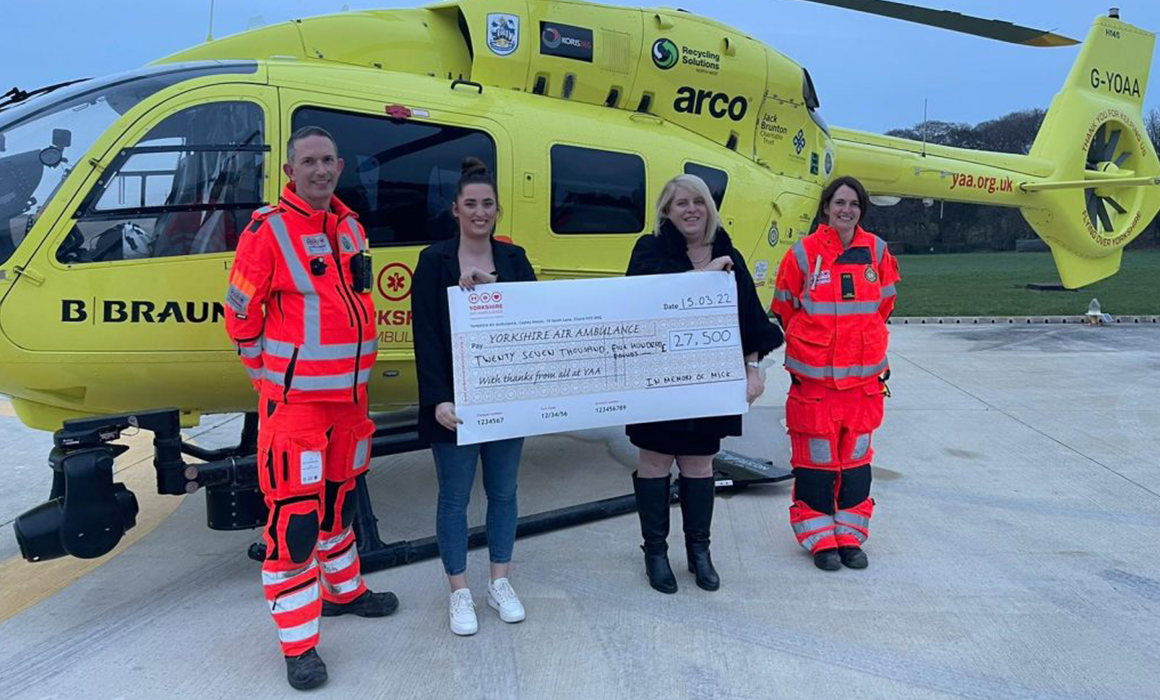 A Wakefield woman, who has now become a long-standing volunteer for the YAA, will have raised in excess of £50,000 for Yorkshire Air Ambulance following her partner’s tragic motorbike accident in 2010.

Tracy Gregory, from Ossett in Wakefield, along with support from her family and friends, has raised the money in memory of her partner Mick Cottam through a variety of fundraising events including several sponsored walks, a regular tombola and two big charity events.  Sadly, Tracy lost Mick in 2010 after he was involved in an accident on his motorbike.  Mick was an avid supporter of Yorkshire Air Ambulance and Tracy made it his legacy to continue supporting the charity following the incident.

“It all started when Mick’s work colleagues asked me if it was OK if they completed a ‘Three Peaks walk in memory of Mick to raise money for YAA, to which I said yes.  On the back of this, I decided to arrange the first charity night, in April 2012. This resulted in both events raising an amazing £9,800 for the Charity”, said Tracy.

In the last 10 years of supporting the YAA, Tracy has dedicated many hours to raise as many funds as she can. She has been part of the local Drighlington village committee and helped organise their annual gala/Drigmas – Xmas event and also a bucket collection each year on the village Santa Sleigh, which has now raised in excess of £20,000 and she also helps to organise regular tractor runs, which have now raised in excess of £50,000 for the Charity.

In April 2014, Tracy held her second charity night along with a 15 mile sponsored walk to which 16 people joined her.  This resulted in a total of £18,300 being raised.

As well as her own fundraising, Tracy became a registered volunteer for Yorkshire Air Ambulance in September 2012 and has now attended more than 500 events representing the charity.

She explained: “I wanted to do more for YAA and asked what I could do to help. It was mentioned that I should become a volunteer and I said I didn’t think I could do that due to work commitments of 50 to 60 hours per week all over the country.  Their response was “just do it in your spare time and make it work for you”.  I really do not have any spare time anymore as I fill my time doing as much as I can to raise awareness and funds for YAA, which I love.”

In November 2021, Tracy held her third charity night in aid of Yorkshire Air Ambulance which brought her fundraising total for the last two years alone to £27,500.  On the night, they had an auction, a raffle with 70 plus prizes and a sponsored shave for someone who hadn’t removed his beard and moustache since 1974.

Kerry Dwyer, Yorkshire Air Ambulance Fundraising Director (West and South), said:” We would like to thank Tracy and her family for all their hard work fundraising for us and bringing awareness about the work we do.  Tracy is a wonderful fundraiser and has also become a fantastic volunteer for the YAA over the year – we are extremely grateful for her time and dedication.  We’d also like to congratulate Tracy for reaching her £50,000 fundraising milestone, which is a phenomenal achievement.

It costs £12,000 every single day to keep both of Yorkshire’s air ambulances maintained and in the air and the money raised will help greatly towards the vital funding of our service.”