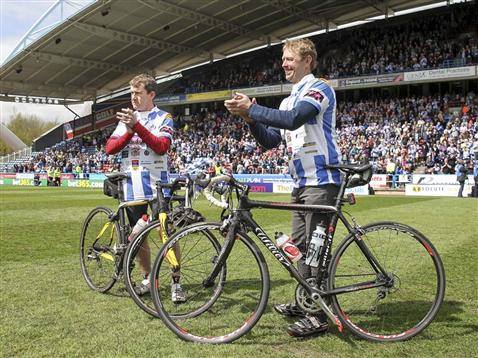 An amazing 270 people have signed up to take part in the Pink Link Pedal for Pounds 5: Chapman Trail bike ride in aid of the ‘Keep It Up’ campaign!

This will be the clubs fifth annual fundraising bike ride and with 270 riders it could be one of the best yet!

Not only will town fans and YAA supporters be riding but we’ve also signed up some of our finest crews to take on the challenge!

The riders will set off from Arsenal’s Emirates Stadium, through Cambridge, Leicester and Doncaster and back to Huddersfield in time for the Club’s last home game against Leicester City on Saturday 26 April 2014.

The event raises money for the Yorkshire Air Ambulance and the Huddersfield Town Academy. Last season’s P4P4: Tour of Yorkshire ride in May 2013 raised an a staggering £190,000 for the campaign.

“It is amazing to see such a high number of people signing up to get involved with the Pink Link Pedal for Pounds 5. What is even more pleasing is that 40% of the entrants are brand new and have never taken part in a P4P event before!

“We are very close to reaching the £1 million target now and with the help of the cyclists, as well as all those who have donated or taken part in a ‘Keep It Up’ event, it won’t be long before we hit it.”

There are sponsorship opportunities available on the ride – for details on how you can get your company’s logo seen please email mark.jacobs@htafc.com or call 01484 484125.

To donate to the ‘Keep It Up’ campaign please visit