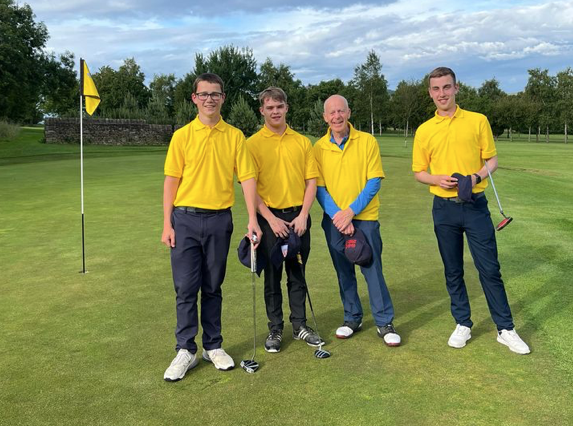 A big thank you to the four golfers from Bracken Ghyll who completed a 72-hole challenge to raise vital funds for us.

We are Bracken Ghyll’s Charity of the Year following us coming to the aid of one of their members earlier this year when he suffered a cardiac arrest.

Danny Thompson, Freddie Gape, William Stoker and Adam Cattell had a delayed start at 04:40 am owing to heavy rain and poor light conditions. It was a soggy start. Despite setting off in the rain, it eased an hour later and for the remainder of the day, conditions improved dramatically. Three rounds were completed before a late lunch break. The quickest round was played in two hours and forty minutes.

“Several club members spectated, and at times it felt like we were playing an exhibition match!” said Will Stoker. “The club gave us a terrific level of encouragement and support. Club captain, Andy Coates, donated the team’s yellow polo shirts which gelled the team and made us stand out on the course. The 72 holes flew by and before we knew it, we had finished, none of us feeling any worse for wear and ready to take on another 72! All in all, a fantastic team achievement”

The initial target of £2,000 has been well surpassed, with donations currently exceeding £3,600.

Helen Berriman, West Yorkshire Fundraiser for Yorkshire Air Ambulance, said: “We would like to say a big well done and congratulations to the players for completing their 72-hole challenge. The £3,600 will help greatly towards the vital funding of our service which costs £12,000 a day to keep our helicopters airborne. Thank you for supporting us.”