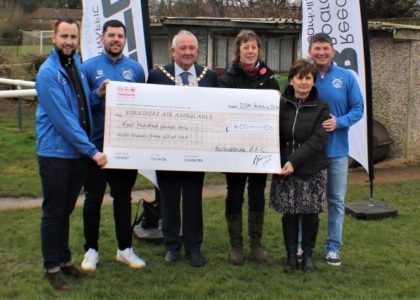 Boroughbridge Football Club recently lost one of its family members following the sudden death of Tony Allen, who died from a heart attack despite the best efforts of Yorkshire Air Ambulance and hospital staff.

Tony, better known  as TA, was born in Stockton -on-Tees and spent his early working life in the Royal Air Force, moving to North Yorkshire in the early eighties where he was employed in the logistics department at Linton-on Ouse as a civilian. Have bike will travel was how he introduced himself to the club and his first night at training was enough to tell us that what he lacked in pace was compensated by an abundance of technical skill and flair.

The early eighties and the two decades following, was one of the most successful periods in the Club’s history and TA was an integral part of that era, enjoying a myriad of success in the Harrogate, Claro and York Leagues, and York & Harrogate District FA’s.  Suddenly this little known club from out in the sticks began to etch a name for itself  which was enhanced further by their exploits in the West Riding County Challenge Cup and Northern Counties Senior Cup Competition. TA hung up his playing boots in 2001 to take on the role of Assistant Manager alongside Daz Ekin and in their inaugural year in the West Yorkshire League they guided the team to the Division One Championship and Divisional Cup. TA’s enthusiasm for the sport and the development of younger players brought him back into the game and he spent a few seasons playing with the A team and following his son Carl.

Even when his interest in the playing side waned he would still be seen on the touchline expressing his views and never afraid to tell it as he saw. The Charity fixture was a spontaneous gesture to TA and once mooted it went ahead within seven days with players from past and present, young and old participating.  A tribute to a great guy who will be missed by us all and the £400.00 raised donated to Yorkshire Air Ambulance.