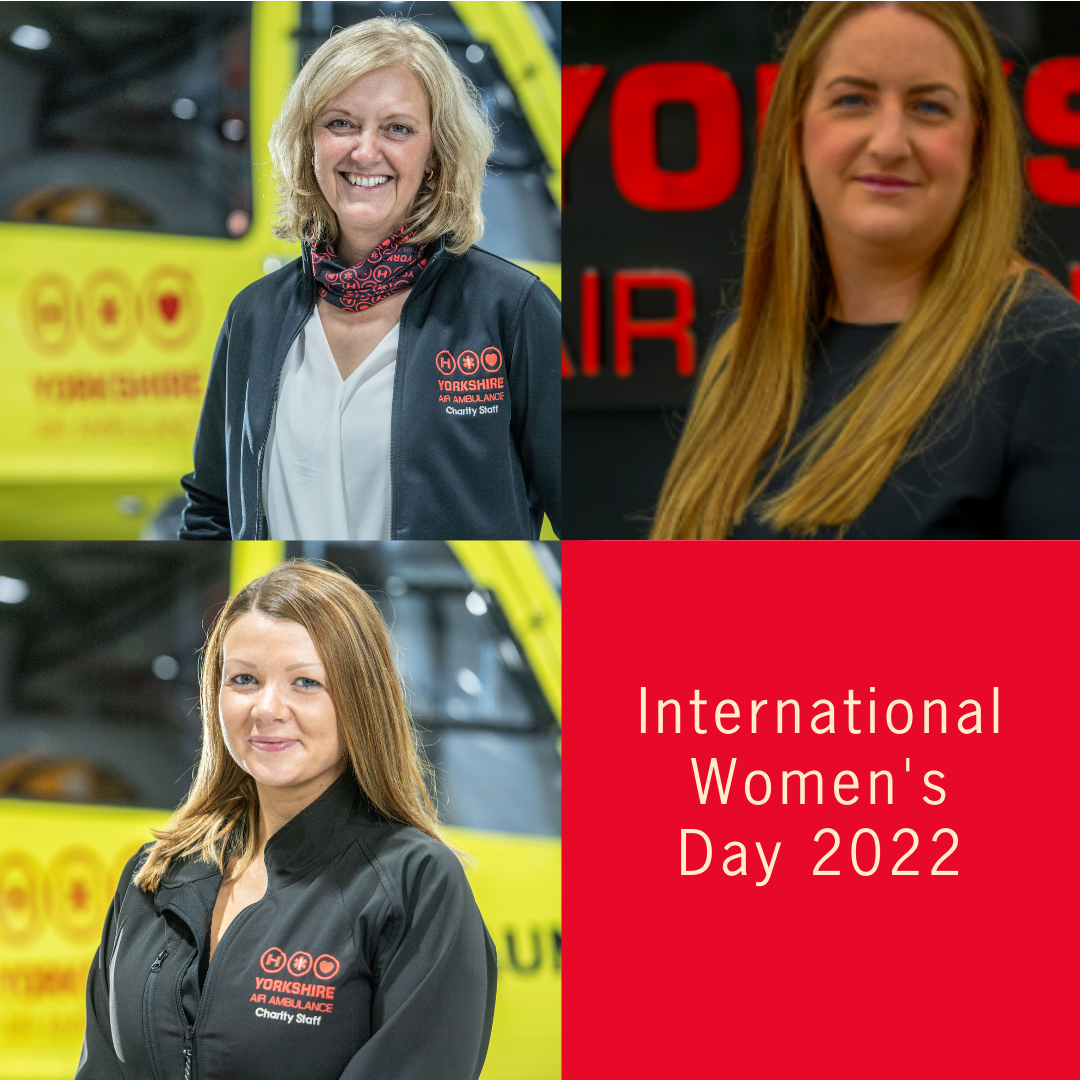 March 8th is International Women’s Day and today we’re celebrating the women in our Senior Management Team. Women are often underrepresented in workplaces, particularly when it comes to higher-level positions. However, as a Charity, we are proud to say that almost 70% of our Senior Management roles are taken by women.

We caught up with three of our Senior Management Team to hear their thoughts on being females in senior roles.

Abby Barmby is our Director of Marketing and Communications. Abby joined Yorkshire Air Ambulance in 2008 after previously working in advertising agencies and as a Marketing Manager for a construction company.

Speaking of her experience as a female in a senior role, Abby said: “I started with the YAA back in 2008 after being made redundant from my previous role.  I was only 24 at the time and my confidence took a real knock.  However, it was the best thing that could have ever happened to me as 14 years later here I am as Director of Marketing & Communications and an integral part of our Senior Management team.  I started off as Marketing & Communications Assistant and have worked hard over the years to grow and develop not only the team but for myself too.  I started as just a one-person team where I covered everything, to now having a team of four fabulous ladies, with individual specialisms who work alongside me every day.  I have had a lot of support, from both male and female mentors over the years as there is a real mix in most marketing industries.  However, it is great to see so many senior marketing positions being taken up by both males and females across the various industries.   Likewise, I’m proud to be part of a fantastic mixed-gender Senior Management Team – each one of us brings a different view or vision to the team and that’s what makes us so successful.  We appreciate and take the time to listen to each other which is key.  My message for anyone starting out in any industry is to use your initiative and be proactive!  We don’t see enough of that these days.  Prospective employers want to see candidates who are keen and willing and can think for themselves – don’t be afraid to stand out from the crowd and showcase your potential and the best of yourself.”

Prior to joining the YAA in 2013, Helen ran her own timber agency working with European timber suppliers to the UK.  Kerry joined the charity in 2009 as one of our first Community Fundraisers and has a background in events coordination.

Speaking of her role and the fundraising industry, Helen said: “The role of a fundraiser can be done by anyone. The skills necessary are predominantly people, and relationship building skills, empathy, communication skills and multi-tasking, being highly organised and pretty tough (for when the rain is pelting down and you have only a gazebo for shelter!) Whilst there are great women in our fundraising team, we have three wonderful men who are extremely successful at what they do. We consider gender is irrelevant for fundraisers, it’s about being a warm and genuine person who can engage with donors on all levels.”

Kerry, commented: “Historically I do believe that there was a trend of a higher ratio of female fundraisers than males across the sector however I believe that has shifted now and there is a great diverse mix in the fundraising community, everyone bringing their own special set of skills to their roles and Charities that they are working for. That is certainly the case at the Yorkshire Air Ambulance.

“I am incredibly proud to be a director at the YAA, I feel privileged to work in a job that is actively providing such a fabulous service to the people of Yorkshire. I am part of a strong mixed-gender SMT and feel that the integration of people from different backgrounds and perspectives is what gives us our strength. If I had some advice to give to other women, with me coming from the era of shoulder pads and aggressive competitive one-upmanship, I would say, no that’s not the way! Women can use their influence in different ways to achieve their goals and have an impact, we don’t have to be like anyone, we just need to be ourselves and believe in ourselves and in the words of Viv Groskop we should lift as we climb”, said Helen.

Kerry added: “I feel extremely proud to be a director, as I am to work for the YAA. I started at the Charity over twelve years ago as a Community Fundraiser and have worked my way up to be in this position. We have had male Directors of Fundraising previously so it has been fantastic to step up into this position and bring my experience and skills to the role, leading our fundraising team and being part of Senior Management along with both my female and male colleagues. I certainly worked hard to earn this position though and suffered knockbacks along the way that just made me all the more determined.  I would hope that my situation would inspire others that this is very possible. It is a fact that still currently there are more male leaders in fundraising than females, although that gap is lessening. My message would be, have confidence in your ability, let your ambition and talent shine through and be clear about what you want- if you believe that you can get to that dream role, one day you will.”