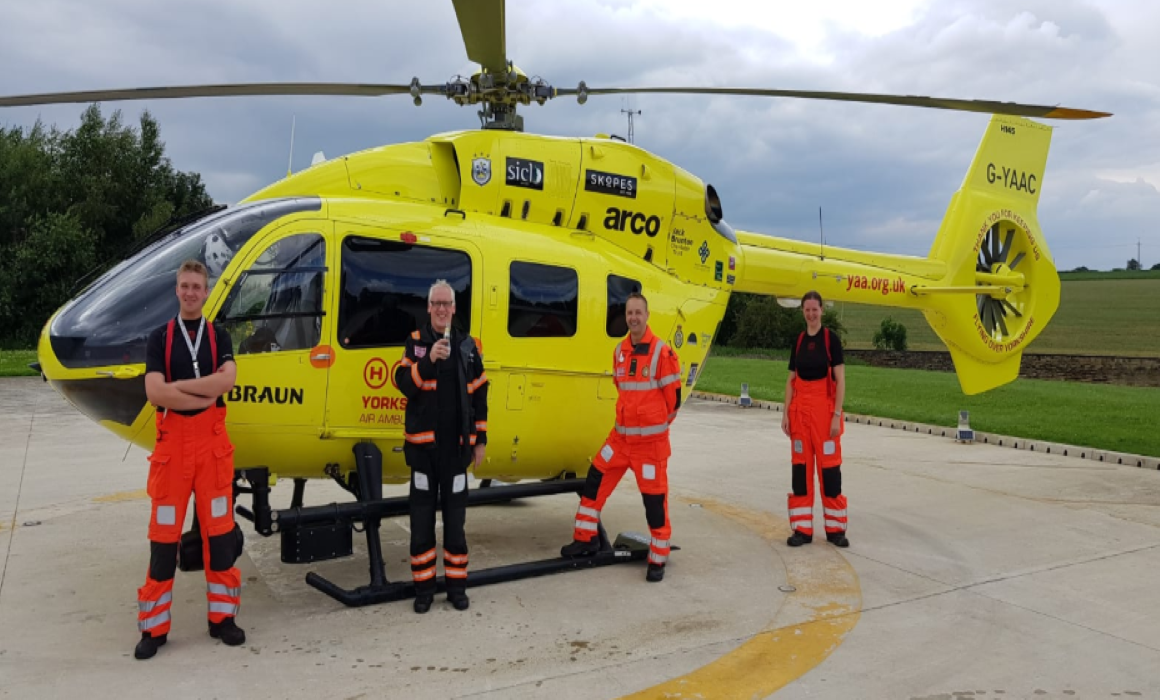 Happy 60th Birthday to our pilot Steve. Waudby. As Steve turns 60 this week unfortunately he is no longer able to fly our helicopters due to UK flying legislation.

Steve’s passion for flying started at a mere age of 13, when he joined the Air Training Corps (air cadets).  He went solo in a glider at age 15, became a gliding instructor at age 16, and at age 20 won a Royal Air Force flying scholarship, where he obtained his Private Pilot’s license.

He joined the RAF in 1983 and worked his way up to Squadron Leader, qualifying as a flying instructor and later becoming the senior helicopter instructional standards examiner.  Throughout his 22 years of service, he has flown all over the world including Northern Ireland, Bosnia, Bangladesh and Hong Kong.

Steve has flown periodically for the Yorkshire Air Ambulance over the last eight years in a freelance capacity, returning full time in August 2018.

According to military tradition, pilots are not supposed to know the exact date of their last flight. Therefore Chief Pilot Owen McTeggart organised a special one off call so that the crew could celebrate Steve’s momentous occasion in style.

Owen McTeggart, YAA Chief Pilot said: “In the military, we used to actively avoid letting a pilot have ‘a last flight’, or at least letting them know it was the last flight, until they had landed.”

On Friday afternoon the plan was to dispatch Steve and the crew to an unknown mission and then promptly ‘stand them down’ and turn the helicopter back to base to be greeted by a few members of the Senior Management Team including the charity’s chairman Peter Sunderland, for a ‘socially distance’ thank you for his many years of duty

However! No plan is fool proof. And almost exactly at the same time we planned to send Steve away on his fictional task, a real task came into the Airdesk, with Steve and the rest of Helimed 98 dashing off to ‘save a life’. As with all things in HEMS, no one knows how long the task will take and Peter with the rest of the senior management team had to leave due to other commitment and arranged to meet up with Steve at a later date. Steve still got his traditional soaking with sparkling wine (non-alcoholic of course) as Paramedic Kit von Mickwitz dashed across to the supermarket while the rest of the crew prepared the aircraft for the return to base.

Steve also had something else to celebrate upon returning to base. On this flight, Steve achieved his 8,760 hours of flying, which equates to a year in the air, a very big milestone for pilots.

Thankfully we’re not saying goodbye to Steve, we are happy to report that he will continue working for the YAA as our Director of Aviation.

Thank you for your many hours of duty Steve and here’s to many more hours supporting our wonderful charity on the ground!