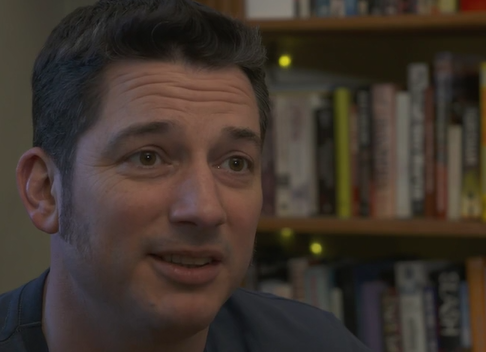 A cyclist from Richmond whose brakes suddenly failed near an 8ft drop on the Yorkshire Moors is set to appear on Helicopter ER on Monday.

On the 30th March 2019, Graham Barber was out cycling his local loop with three of his friends when his brakes failed, sending him tumbling down an 8ft bank.

“I do quite a lot of mountain biking and have done it for the years. But unfortunately the more you do something, the more you are likely to have an incident”, said Graham.

He continued: “I was out bike riding with my friends and suddenly my brakes failed. I thought I’d turn on to a grassy bank, but it turned out to be a steep drop.”

Due to Graham’s remote location, the Yorkshire Air Ambulance were dispatched with one of their Critical Care Team doctors and two of their paramedics.

After assessing Graham, a decision was made for him to be taken to Darlington Hospital. Mountain Rescue extracted Graham from the steep bank and he was taken to hospital by road ambulance.

Tests at the hospital revealed Graham had sustained an open dislocated finger on the left hand, multiple fractures in his wrist and a bruised bone. He was also left with grazes on his forehead from his helmet.

Thankfully Graham was wearing his protective gear and after a short stay in hospital and surgery to fix his finger, he has now made a full recovery and he’s back on his bike.

Speaking of the Yorkshire Air Ambulance, Graham said: “They all do an amazing job to help people in our type of situations and I couldn’t have asked for anything more from those involved. Luckily it was the first and hopefully last time I have needed them.”