Adrian Toye tells us about his Bibbulmun trek which raised over £2,000 for YAA 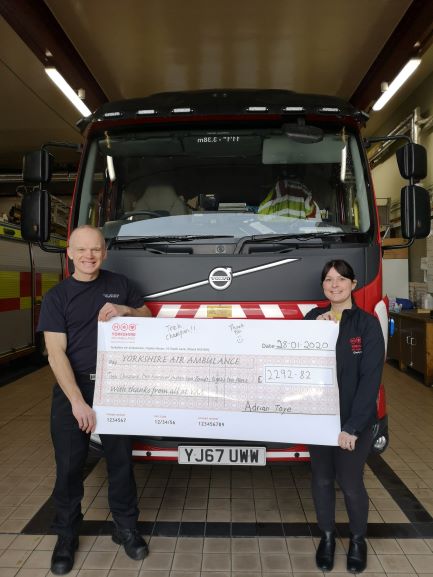 When the idea of walking over 1000 kms, carrying all food, gear and water was first put to me over 3 years ago in the summer of 2016 I never really gave it too much thought.  I told my mate, based in Perth, Australia, I was interested, warned my fiancée and our three children, started saving up and got on with life, not giving it a second thought.

Twelve months later I thought it’d be best to talk with my employer (Royal Berkshire FRS) to ask them about taking time off, seeing as the trip would take in the region of 6-8 weeks!  They agreed and I carried on forgetting about it for another 18 months.

Fast forward to the end of 2018, and finding myself employed by a different fire service (West Yorkshire FRS), following a transfer, I suddenly remembered that I was supposed to be flying to Australia in September 2019 to embark on a long distance trek – best get my life in order and start preparing for it, I thought.

Luckily for me, my new employer’s, following a few meetings, emails and logistical tweaks also welcomed the idea.  I had decided to raise awareness and funds for The Fire Fighters Charity and Yorkshire Air Ambulance during the build up to the trek, as it seemed pointless flying over 9000 miles and walking over 600 miles for no good cause.

I was about 6 months from my departure date when I started thinking about training specifically for the trek and due to my shift at work the majority of my training was carried out, mind-numbingly, on the treadmill at Rawdon fire station.

After a few months of training, researching, purchasing, begging and borrowing I found myself waving goodbye to the family at Manchester airport during a cool morning on 21st September.  Less than 24 hours later I was going to be meeting up with an ex-army mate who I’d not seen since 1990!  Damien was supposed to be joining me on the trek, along with a couple of others from ‘back in the day’, but due to him accepting a new job (where the amount of time off wasn’t possible) and the others not taking the initial idea as seriously as me, I had decided to ‘go it alone’.

The Bibbulmun Track (www.bibbulmuntrack.org.au) stretches just over 1000 km between Kalamunda in the Eastern Perth hills to Albany on the south coast of Western Australia.  During this time of year, Spring, it was advised to attempt the trek in a southerly direction in order to escape the approaching heat from the Equator.  I, being a stubborn fool, decided to do the opposite.  The Track spans a diverse landscape encompassing sandy beaches, coastal headlands, dense forest trails, open flat plains, rocky hilly tracks and inlet crossings and was home to an abundance of flora and fauna with hundreds of spring flowers, various species of majestic trees, kangaroos, wallabies, emus, monitor lizards, snakes, porcupines, quokkas and countless birds amongst its numbers.

Along its length there are nine track towns (where I posted food parcels to, to collect en route) and  ‘camps’ consisting of a wooden, open fronted hut (used as a sleeping shelter), a long drop toilet (dunny), rainwater butts and camping pitches.  It was designed to be completed in 8 weeks, with a hut available at the end of each days walk.  However, due to my limited time I had a maximum of 45 days to complete the trek before I headed back home on 9th November.  This, of course, meant I had to ‘double and triple hut’ on numerous days so I could fit the whole distance in.  On average I would be walking 24 km daily and carrying anything from 20 to 27 kg on my back.

I started the Track on 25th September, spending the first 10 days pounding the dry, deep sandy coastal headlands with way too much weight in my pack.  The shock my body endured through walking continuously over tough terrain was noticeable with my feet, shoulders and back all suffering from the relentless physical activity.  Luckily for me the weather was still relatively mild at an average of 22 Celsius.  Even though I was finding each day hard work, as long as I ate my hot freeze-dried meal and slept for 6 hours I was raring to go the following day.  Those initial days I would wake in the night with aching legs, unable to get comfortable, tossing and turning until the sun came up.

Even though I never doubted I’d complete the trek I realised that if I didn’t lose some weight out of my pack my shoulders would probably knot up and deteriorate sufficiently to slow me down considerably.  Once I reached Northcliffe, the fourth track town, and one with a post office, I gathered some non-essential items and packed a 3 kg parcel back to Perth.  When I reached the track towns I craved sugar, sugar and more sugar.  As soon as I sensed the convenience store I would race there and down a Mars bar, ice cold can of coke and an ice cream before thinking of anything else.  Living off freeze dried meals, trail mix, tuna and porridge was getting me by, but only just.

Leaving the coast and acclimatising well, to both the weather and the job in hand, I soon got into my stride and with the reduced weight I was beginning to enjoy the challenge.  Due to me walking the track in the ‘wrong’ direction I found I’d never walk with fellow hikers and could go a few days at a time without seeing a single person.  The solitude was wonderful and something which I enjoyed the most, wishing there was no one in the huts at the end of my days became something I found myself doing more and more as I progressed.  However, equally, it was great chatting and getting to know the fellow walkers whom I did share huts with.

I found the middle part of the trek quite tough, mentally, due to the similar landscape throughout.  It was quite claustrophobic and every now and then I momentarily got annoyed by the smallest things, like tripping up, missing a turning, repetitive birdsong, etc.  I’d soon snap out of it after having a word with myself.  Crazy really when you think how relaxing the environment was compared to the hustle and bustle of family and work life.  I was missing the coast and starting to resent the forest trails I walked along.  The physical and mental challenge I was experiencing was obviously having a powerful affect on me, more than I realised.

When I started the Track, the thought of over 40 days continuous walking made me feel a little unnerved, but having got into a rhythm and having met and camped with so many interesting people it was a shock when I found myself having only a few days left to walk.  Where had the time gone?

The last few days were very difficult as I found myself in a very hilly and rocky landscape.  This, together with the increased temperature (into the 30’s on some days), made the final push tough going and the sight of the finish, along with a small welcome party, was most welcome indeed.  I’d lost 8kg on the Track and it was now time to put that weight back on, eating everything and anything in my path!

Damien had contacted the local Kalamunda fire fighters and explained my challenge.  They came along in their engine to greet me and subsequently fed and watered me at their station following some obligatory photographs.  A fish finger sandwich and meat pie has never tasted so good!

I completed the non-stop challenge in 42 days and have managed to raise over £4400 for the two charities.

Laura Lawton, West Yorkshire Community Fundraiser for the YAA, said: “We would like to say a huge well done to Adrian for completing one of the worlds longest treks and a huge thank you for supporting the YAA and raising such an incredible amount of money.

It costs £12,000 a day to keep both of Yorkshire’s air ambulances maintained and in the air and the money raised will help tremedously towards the vital running of our service.”